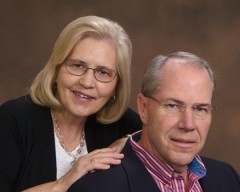 Clyde and Bonnie Johnson are state directors for New Mexico. Clyde was born and raised in Denton, Texas in a pioneer pastor’s home. He began his fulltime ministry at the age of 19 and has served in a variety of positions including, youth pastor, associate pastor, evangelist, senior pastor, state youth and Christian education director, kids, youth, and college age camp directors, Executive Presbyter, and well as serving on various boards and committees.

He is married to the “love of his life”, Bonnie, for over 38 years. They have two married daughters and have 4 beautiful grandchildren. Clyde and Bonnie live in Albuquerque and are excited to serve with the Pastoral Care, Inc. team as directors in New Mexico.

Clyde has a heart for hurting warriors of faith and desires to help God’s champions. His desire is to bring encouragement, support, joy, and peace to our pastors as they try to encourage others to live their lives pleasing to the Lord. We are so excited to have the Johnsons as a part of our Pastoral Care, Inc. team! 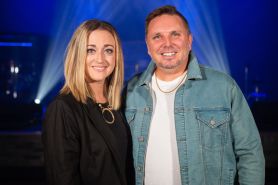 We are proud to present Keith and Jackie Underhill as our new Area Directors for Northeastern Arkansas. The both enjoy having fun doing life together. They epitomize the concept of team in the ministry. They have served as staff members and lead pastors in Assemblies of God churches in Arkansas and Oklahoma.

Since 2013 they have served as Lead Pastors at Wynne First Assembly in Eastern AR. Keith is a member of the AR Assemblies of God District Board. They have two grown children. Their activities for enjoyment and relaxation include being with family, hunting, fishing, camping, horseback riding, gardening, and four-wheeling.

Keith & Jackie have a heart for pastors and have seen first-hand how Pastoral Care, Inc. helps pastors.  We are proud to have them as a part of the PCI team! 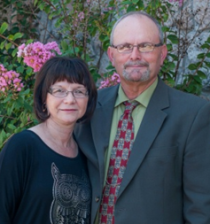 ﻿We are proud to present Raymond and Carolyn Doke as our new State Directors for Eastern Oklahoma and Western Arkansas. Raymond and Carolyn are new to Pastoral Care, but know first-hand how Pastoral Care, Inc. operates since they have personally benefited from using our services.  Raymond and Carolyn are not new to ministry.  They have been pastors for over 25 years in churches in Oklahoma and Arkansas.  They understand the demands and struggles a lead pastor faces on a daily basis.  Raymond has always had a heart for our new pastors who struggle to stay in the ministry as well as those senior pastors who have "given" their lives for the sake of the ministry.

Raymond and Carolyn Doke recently moved to Eureka Springs, Arkansas where he is the lead pastor at First Assembly of God.  They both love this area and have a heart of serving others.  Once you get to know Raymond and Carolyn, you feel as if you have known them for a long time.  You will soon feel the love and care they display on a daily basis.

When the opportunity came to serve with Pastoral Care, Raymond sated, “This is great timing for us...to help promote Pastoral Care, Inc. to our pastors in our state as well as to let them know there is a minitry who cares.  We are proud to ba a part of this great ministry!"

Raymond and Carol Shann are Area Directors for Southeast Oklahoma. They have been in the ministry for the past 29 years and have pastored 3 churches before evangelizing. Raymond has a heart for pastors. He understands the demands and hardships pastors go through on a daily basis. Because of this, he and Carol have personally mentored and encouraged younger ministers to “stay the course” and achieve what God has called them to do.

Raymond and Carol have been a part of PCI from its inception. Their experience and dedication in helping pastors is invaluable to our ministry.  During these difficult times, pastors need a "God-Sent" person who can show and deliver His love and compassion to them, especially when they need it the most. Raymond and Carol are truly "God-sent" people!  We are so glad to have Raymond and Carol a part of Pastoral Care, Inc.

Raymond and Carol have two married children, one of whom is a doctor in Mississippi and the other one is studying to be a physical therapist, living in Eufaula, Oklahoma. They have 6 grandchildren. 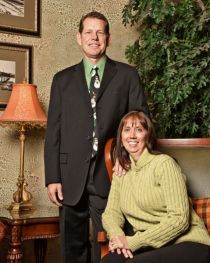 Kevin and Kendra Akins has joined our staff as Area Director for Western Oklahoma and West Texas.  Kevin is an ordained minister and recently accepted to be the pastor in Elk City, Oklahoma.  He has traveled as a full-time evangelist for the past 10 years. His ministry traveled over much of Oklahoma, Missouri, West Texas and parts of Colorado. Kevin soon realized that many of those pastors are bi-vocational, working full-time on a secular job while fulfilling the duties of a pastor. He and his wife Kendra soon found out the struggles these pastors face everyday.

Before evangelizing, Kevin and his wife served as pastors but have always had a heart for ministers and discovered ways to bring encouragement to them. They established a retreat center called Journey's Inn, built in the heart of Oklahoma. Their goal was to strengthen our ministers and churches through their ministry. Their ministry theme was “Winning the Hearts of Men for the Heart of God in the Heart of America”.

Kevin understands the need for such a ministry as PCI. Too many ministers are leaving the ministry! They need encouragement, support, and a safe place to turn for help. Kevin and Kendra have two children, one married son living in Missouri and one daughter living in Texas.   We are excited to have Kevin and Kendra involved in our ministry! 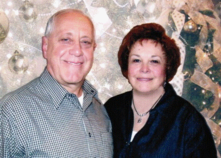 David and Marsha McNeely are Directors in the New England Area.  Both have been in the ministry since 1968. They have served as associate pastors, senior pastors, and missionaries.   From 1980 until 1985 they served as Youth and Christian Education Directors for the West Texas Assemblies of God. In 1986 they moved to Boston, Massachusetts as US Missionaries with the Assemblies of God.

On Easter of 1988 they founded Christ the Rock Assembly of God in the Dorchester neighbor- hood of Boston. They served there as pastors for nine years. That church continues as a strong multi-ethnic church of 200.

Since 1998 their ministry has been the New England Leadership Institute (NELI). Its purpose is to equip and encourage urban leaders for ministry. NELI ministries include (1) assisting with the District School of Ministry for the Southern New England Assemblies of God preparing church leaders to become credentialed A/G ministers (2) mentoring church planters/missionaries.

A recent addition to their ministry is The Barnabas Suite, a 2 bedroom apartment located in the Lower Mills area of Boston. Its purpose is to be a place of rest for hurting, struggling ministers of all denominations who could not afford to get away otherwise.

David says. “When we were introduced to PCI, we realized it would be a perfect fit with the desire God has been developing in us to minister to the “whole man” - to help meet any need a minister might have.”

David is a graduate of the University of Texas at Austin (BBA, 1970), Southwestern Assemblies of God University (BS in Pastoral Ministry, 1970), and Gordon-Conwell Theological Seminary (MA in Urban Ministry, 2001). Marsha has served as a wedding coordinator, a special events decorator and presently serves with David in their ministry. They have two grown children and three grandchildren.