How To Help A Grieving Teen 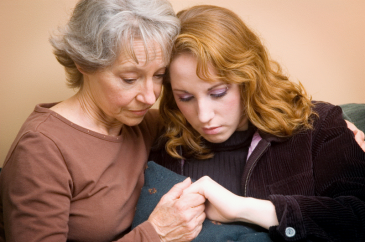 What does a teenager feel when someone close to them dies? How do they respond to the death of a parent, a sibling, a relative, a friend?  In our work with teenagers, we’ve learned that teens respond better to adults who choose to be companions on the grief journey rather than direct it. We have also discovered that adult companions need to be aware of their own grief issues and journeys because their experiences and beliefs impact the way they relate to teens.  Full article can be viewed and printed with Word or PDF formats at the links located at the bottom of this page.

1.Grieving is the teen’s natural reaction to a death. Grief is a natural reaction to death and other losses. However, grieving does not feel natural because it may be difficult to control the emotions, thoughts, or physical feelings associated with a death. The sense of being out of control that is often a part of grief may overwhelm or frighten some teens. Grieving is normal and healthy, yet may be an experience teens resist and reject. Helping teens accept the reality that they are grievers allow them to do their grief work and to progress in their grief journey.

2.Each teen’s grieving experience is unique. Grieving is a different experience for each person. Teens grieve for different lengths of time and express a wide spectrum of emotions. Grief is best understood as a process in which bodily sensations, emotions, thoughts, and behaviors surface in response to the death, its circumstances, the past relationship with the deceased and the realization of the future without the person. For example, sadness and crying may be an expression of grief for one teen, while another may respond with humor and laughter.

“I hate it when people think I should be grieving according to the ‘stages’ described in some high-school health book. Since my sister’s death I’ve learned that grief isn’t five simple stages.” Kimberly, 17

While many theories and models of the grieving process provide a helpful framework, the path itself is an individual one, and often lonely. No book or grief therapist can predict or prescribe exactly what a teen will or should go through on the grief journey. Adults can best assist grieving teenagers by accompanying them on their journey in the role of listener and learner, and by allowing the teen to function as a teacher.

There are, however, “helpful” and “unhelpful” choices and behaviors associated with the grieving process. Some behaviors are constructive and encourage facing grief, such as talking with trusted friends, journaling, creating art, and expressing emotion rather than holding it inside. Other grief responses are destructive and may cause long-term complications and consequences. For example, some teens attempt to escape their pain through many of the same escape routes adults choose: alcohol and substance abuse, reckless sexual activity, antisocial behaviors, withdrawal from social activities, excessive sleeping, high risk-taking behaviors, and other methods that temporarily numb the pain of their loss.

“My friend went crazy into drugs, sex, and skipping school after her boyfriend got killed in a skiing accident. She stopped talking about him. Now she’s kicked out of school and is pregnant by a guy she hates. Since my boyfriend’s car accident, I know what can happen if I make wrong choices like her.” Sara, 18

4. Every death is unique and is experienced differently. The way teens grieve differs according to personality and the particular relationship they had with the deceased. They typically react in different ways to the death of a parent, sibling, grandparent, child, or friend. For many teens, peer relationships are primary. The death or loss of a boyfriend or girlfriend may seem to affect them more than the death of a sibling or grandparent.

“Expect the unexpected. Emily actually danced and sang after I told her that her mother died. I was shocked. Later I realized the relief we both felt. The relationship had been filled with her alcoholism, lies and illness.” Father of Emily, 17

"When my mother died, my life was crushed!  The only way that I was able to cope with hurting was to find humorous stories.  I told jokes to my friends to prevent me from crying."  John, 14

Within a family each person may mourn differently at different times. One may be talkative, another may tend to cry often, and a third might withdraw. This can generate a great deal of tension and misunderstanding within the already stressed family. Each person’s responses to death should be honored as his or her way of coping in that moment. Keep in mind that responses may change from day to day or even from hour to hour.

5. The grieving process is influenced by many issues. The impact of a death on a teen relates to a combination of factors including:
* Social support systems available for the teen (family, friends and/or
community)
* Circumstances of the death - how, where and when the person died
* Whether or not the young person unexpectedly found the body
* The nature of the relationship with the person who died - harmonious,
abusive, conflictual, unfinished, communicative
* The teen’s level of involvement in the dying process
* The emotional and developmental age of the teen
* The teen’s previous experiences with death

6. Grief is ongoing. Grief never ends, but it does change in character and intensity. Many grievers have compared their grieving to the constantly shifting tides of the ocean; ranging from calm, low tides to raging high tides that change with the seasons and the years.

“I’ve had people say that you’ve got to go on, you’ve got to get over this. I just want to shout, ‘You’re wrong! Grief never ends.’ I don’t care what they say.” Philip, 13

Copyright © 2020  Pastoral Care Inc. All Rights Reserved. All material is intended for individual use only. Any other use, such as distribution, promoting one's ministry or adding to websites, is prohibited unless written permission granted by Pastoral Care Inc.

DISCLAIMER:  The contents in this article does not make you a professional counselor or therapist.  You may have to seek professional help for those you serve.